And you may ask yourself, well...how did I get here? 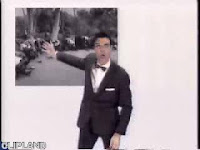 Ages ago (8 days in real time, 20 years in blog time) simian muckraker and presidential candidate Doctor Monkey Von Monkerstein tagged me and a few others with an interesting meme:

"The premise is: List five things that I never pictured being in my future when I was 25."

I've been thinking about this one. See, here's the thing--by the time I was 25 years old, I was pretty much on the path I've followed since then. While there have been surprises, my life now does not represent a total divergence from the life I would have imagined at 25. I was married, MizBubs was pregnant with our first child, and while I wasn't a cop yet I was working as a campus security officer and thinking about becoming the real police. So while there's undoubtedly stuff that I never pictured being in the future--the Interwebs, the GW Bush presidency and its open-ended war--none of the stuff that's ended up in my future is far out of whack from what I pictured at 25.

Thanks for playing along!

Dr MVM, you're welcome. Sorry it took a while!

Funny how great being a person in an authority position can be.

Am in the middle of finals week, but will post soon.

I wish somebody had told me this back then, so I could've enjoyed being in my twenties and thirties more than I did - what a perfect way to sum up this life.

Laughing maniacally while under the influence - is that legal?!

I once worked at Kroch's and Brentano's in Oak Brook and did some inventory work at the Wabash store when the place was going out of business. We may have crossed paths and never knew it.

I remember Kroch's & Brentano's at Woodfield. I used to get the biggest kick out of calling it "Crotches & Brentano's." Kids.