"My God, his head is BIG. I mean, it's like twice the size of Nancy Pelosi's, and he's not that much taller."

--MizBubs, commenting on Newt Gingrich's head after seeing the We Can Solve It commercial featuring Pelosi and Gingrich. After a couple of bourbons. 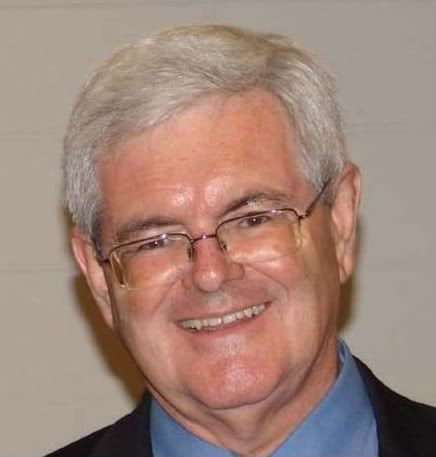 Well, you know what they say-- the bourbon alone adds ten pounds.

I saw Newt having breakfast at Old Ebbitt Grill last Tuesday. That really is one giant melon on his shoulders.

That girl dynamo of yours just cuts through all the BS doesn't she? That's why we all admire her so much.

Ask Mindy; she knows him.

It's gotta be big to hold all those important, lofty American ideas.

Honey, to be filled with that ego and pinata candy, it has to be ginormous. What I wonder is when someone is when we'll be able to bust that bitch open and collect a few tootsie rolls and snicker bars.

Nature abhors a vacuum and that is why Newt corks his ears.

Write, he might want to let some air out--he's really starting to swell.

Gifted, my blessing and my curse.

Dr MVM, she is my bullshit detector.

DCup, thanks for the confirmation!

Johnny, you are so right.

Yes, bubs, the current Mrs. G is a friend of mine from college and I've met him several times. I didn't want to like him, but he's actually a really nice guy and a good conversationalist, though I still find his politics abominable. Word to the wise - he is not to be underestimated...that guy may still be the undoing of the Democrats.

And yes, his noggin is HUGE. Those must be some neck muscles.

I've always gotten the sense he'd be fun to talk with. Maybe some time we can all get together for barbecue and global warming talk. Just, uh, ix-nay on the elon-may.