It's been too long, and there are far too many freaks roaming the alleys and highways of our great nation. Knowledge is power, and you, the people, have a right to know. 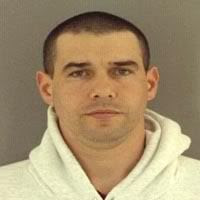 Our first freak is Robert E. Lee of Mechanicsville, Virginia. Yes, that is his real name. Mr. Lee, a manager at a local Sears, was caught peeping into women's dressing rooms. According to the police, Lee had constructed a "makeshift masturbatorium" in the rafters:

...investigators discovered the Sears manager had created a makeshift masturbatorium from a service platform just above the ladies’ dressing rooms.

It appeared to investigators that the prefab peeping hutch had been in use for quite some time, the victim’s lawsuit alleges, and that Lee admitted to watching the girl and her mother trying on bathing suits.

“During the search of the room, police officials recovered sexually explicit magazines and seminal fluids,” the suit says.

At least it wasn't referred to as a "sprawling ramshackle masturbatorium".

53 year old David Nelson, of Billings, Montana was arrested in the reception area of the Comfort Inn. Mr. Nelson had made himself comfortable by getting naked and arming himself with a .45 handgun. He knocked on a few room doors, and then tried to climb over the desk.

Moving on to the world of politics....

Thomas Blacine, the "naked tickler" was sentenced to 25 years in prison. Mr. Blacine was featured on these pages in October 2007.

Mr. Adrian Apgar (now known as "lefty") was arrested by police after being discovered in a canal, naked, apparently trying to sneak up on an alligator. When the police called out to Mr. Apgar he told them to be quiet, and asked them to turn their spotlights off.

Apgar appeared on this blog in November 2006 after he lost his arm in an earlier, crack-fueled naked encounter with an alligator. I will always be in his debt, because he inspired me to begin my research in the brave new science of narcozoology.

An unknown 30 year old woman told police that she was standing in an intersection directing traffic, topless, because God told her to. Why does God never tell anyone to get a job, or just straighten the hell up?

The Sunshine State is now on the brink of finally having an anti-bestiality law. Lawmakers heard a moving story from a local prosecutor before voting:

Before the vote, Leon County prosecutor Michael Bauer sent Rich and other senators a letter recounting his troubles prosecuting the 2006 case of a blind guy who had sex with his male yellow Lab "Lucky." The man explained "freely about his regular sexual acitivities with his dog and said he would take the dog for a walk prior to sex to 'prevent fecal impact.'"

"However lurid the allegations may be, we should resist a rush to judgment." At least until after the attorney cashes the check.

Seriously, how would you like to defend this guy? Do you think this is the kind of groundbreaking legal work the attorney thought he'd be doing some day when he was in law school?
_____________________
30 year old Nicholas Hadzik was arrested for causing thousands of dollars in damage at a Pennsylvania motel and grocery store. Mr. Hadzik did this while he was naked. There's some video of the incident here.

Alcohol was involved. Clearly Mr. Hadzik never learned that naked, drunk and rampaging is no way to go through life.

Apparently that Mardi Gras feeling never stops for Sharon Hall, 50, of Alexandria, Louisiana. Police arrested her after she was observed dancing, sans pants, in front of a group of approximately 20 men in a local park. She also lifted her shirt a few times, had a crack pipe on her, and resisted arrest. No alligators were involved.
_____________________

Thanks for stopping by. Until next time, remember--constant vigilance!
Posted by Joe at 11:55 PM

It is weenie, it is wavy and it was almost Thursday.

Holy crap this is some mighty funny shit, 'ceptin' its all true.

You got this in five minutes under the wire! Weenie-Waver Thursday just doesn't have the same amount of zazz as Wednesday.

This is perhaps your most comprehensive, informative and moving Weenie-Waver post yet! And you have added a new word to my vocabulary!

First, how did Sears security not catch Robert E. Lee, unless they were using the same facility too?

Second, I don't understand the attraction to alligators, but the whole concept seems destined to go horribly wrong.

Third, though in theory I would love to encourage more topless traffic control, no good from the ensuing distracted drivers will come of that either.

There but for the grace of God...

Just so you know- "mastabatorium" is a Roman word and it's being used incorrectly by the police in this instance.

The mastabatorium was where you went to WATCH people in the act, not the other way around as in the instance of this Sears Manager you cite.

Sort of like an aviary, only the birds are people and are beating off.

Glad I could clear that up.

I guess I am late to the party since this is my first reading of your mastabatorium series!

As with many of my problems I have had, "Alcohol was involved" is a key phrase...

It's a cornucopeia of wienie wavers around here too much. I think I need to go lie down.

Excellent work as usual. I was surprised to read alcohol was involved in some of the exploits. Usually drunks are such tidy, organized people.

Also, "Seminal Fluids" would make for a great band name.

Grant is so onto something... I can see the flyer now:

"LIVE Saturday 11pm - One Night Only! ***Seminal Fluid*** at the Mastabatorium Cover Charge $10 Must be 21 to Enter Alcohol Will Be Involved!"

(you see I could have been somebody, a contender - a promoter - instead of a blogging bum, which I am)

"Why does God never tell anyone to get a job, or just straighten the hell up?" Thanks for asking the tough questions.

Dr MVM, you're welcome. That's been troubling me for years. For every freak I've met who thinks God is talking to him, God NEVER tells them anything encouraging. It's always "light the fire" or "Take off your clothes" or "break all the mirrors in the house" or "paste Imelda Marcos' head over all the pictures of the naked women in your notebook" and stuff like that.

Fran, Grant...work among yourselves and report back to the group later. I expect big results.

Barbara, it is a bit overwhelming isn't it?

Coolcat, I hope it's not too makeshift. Maybe throw some extra 4x4's under there.

Skylersdad, glad you can visit! I used to do this more regularly but fell out of the habit this spring. I won't let that happen again. I might do a freak of the week contest next week.

Dean Wormer, thanks for stopping by! You have given me my favorite quote this month:

"Sort of like an aviary, only the birds are people and are beating off." Brilliant!

Mob, I feel guilty being in a bathrobe, I know what you mean.

WP, it does beg the question doesn't it?

Splotchy, I try to be of service. Next Wednesday's group will be along sooner in the day.

I love that they had to report that alcohol was involved, like we couldn't have guessed.

OK SRC readers, I would like to know about YOUR "makeshift masturbatoriums." I bet you could come up with an interesting variety.

And I think WP is onto to something. Wouldn't there be a lot of men thanking God for His instructions to such a traffic cop?

Just for the record, God has instructed me to take time off from work and eat entire bags of Cheetos in one sitting. And sometimes I follow His advice.

masturbatorium is my favorite word. I am glad to know what it really means.

okay its kind of creepy that number 1 happened like an hour from me. Note to self - do not shop at Sears

I think maybe Sears needs to evaluate their need for so many manager positions in the stores. It appears they have some time on their hands.